The Southern Ground Hornbill or (Bucorvus leadbeateri; formerly known as Bucorvus cafer), is one of two species of ground hornbill and is the largest species of hornbill. The other species of the genus Bucorvus is the Abyssinian Ground Hornbill, B. abyssinicus. This is a large bird, at 90 to 129 centimetres (35.4 to 50.8 in) long. Females weigh 2.2 to 4.6 kilograms (4.9 to 10.1 lb), while the larger males weigh 3.5 to 6.2 kilograms (7.7 to 13.7 lb). Among standard measurements, the wing chord has been measured from 49.5 to 61.8 cm (19.5 to 24.3 in), the tail from 29 to 36 cm (11 to 14 in), the tarsus from 13 to 15.5 cm (5.1 to 6.1 in) and the culmen from 16.8 to 22.1 cm (6.6 to 8.7 in). Per Stevenson and Fanshawe, the Abyssinian Ground Hornbill is the larger species on average, at 110 cm (43 in), than the Southern species, at 102 cm (40 in), but published weights and standard measurements contrarily indicate the Southern species is indeed slightly larger.
The Southern Ground Hornbill is characterized by black coloration and vivid red patches of bare skin on the face and throat (yellow in juvenile birds), which are generally believed to keep dust out of the birds eyes while they forage during the dry season. The white tips of the wings (primary feathers) seen in flight are another diagnostic characteristic. The beak is black and straight and presents a casque, more developed in males. Female Southern Ground Hornbills are smaller and have violet-blue skin on their throats. Juveniles to six years old lack the prominent red pouch, but have a duller patch of grey in its place. 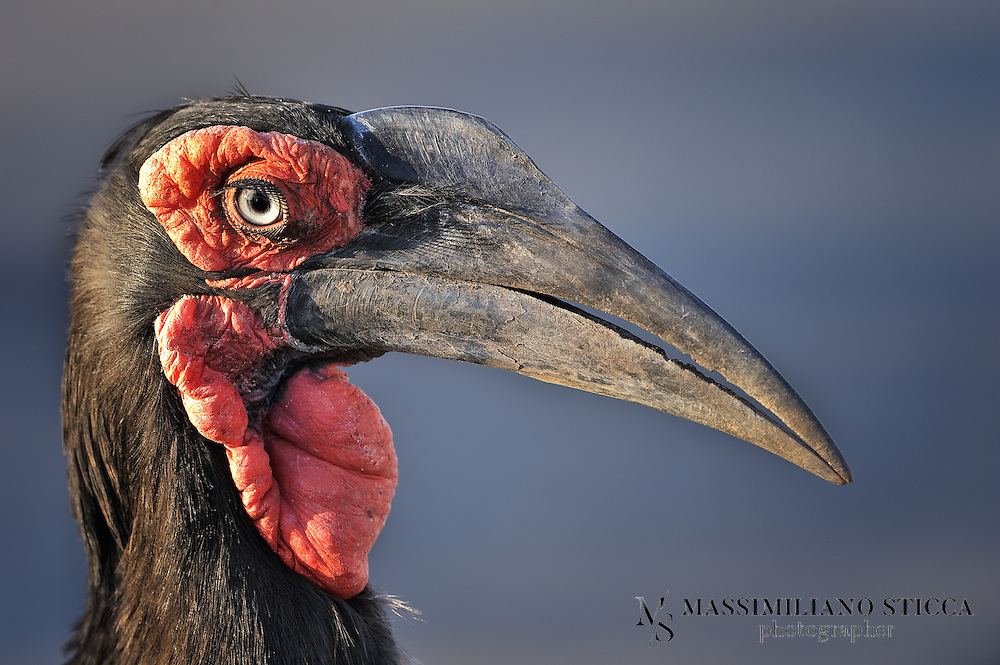